OK, so I ate a 10mg 1:1 weed edible as I downloaded it. And, OK, I smoked a jay of Ol’ Mendo Hashplant before I clicked play. So, forgive me as I heap praise on Bill & Ted Face the Music.

Perhaps the COVID-related drought of new releases has left me thirsty for the sweet, sweet nectar of Hollywood spend. Perhaps my throbbing high was digging deep into my brain’s pleasure center.

Or perhaps I’m still royally pissed from the recent post-Gen-X/pre-Millennial film sequels that were utter shit-stains like Dumb and Dumber To, Zoolander 2, or Anchorman 2. All number 2 films that really were number 2s.

So, I was incredibly relieved—and stoned—to see Bill & Ted Face the Music rise above this Xennial sequel trap. Watching the film, I wasn’t disappointed, but I also wasn’t overwhelmed. But I was pleasantly delighted. I was plealighted.

The ballad of Bill and Ted 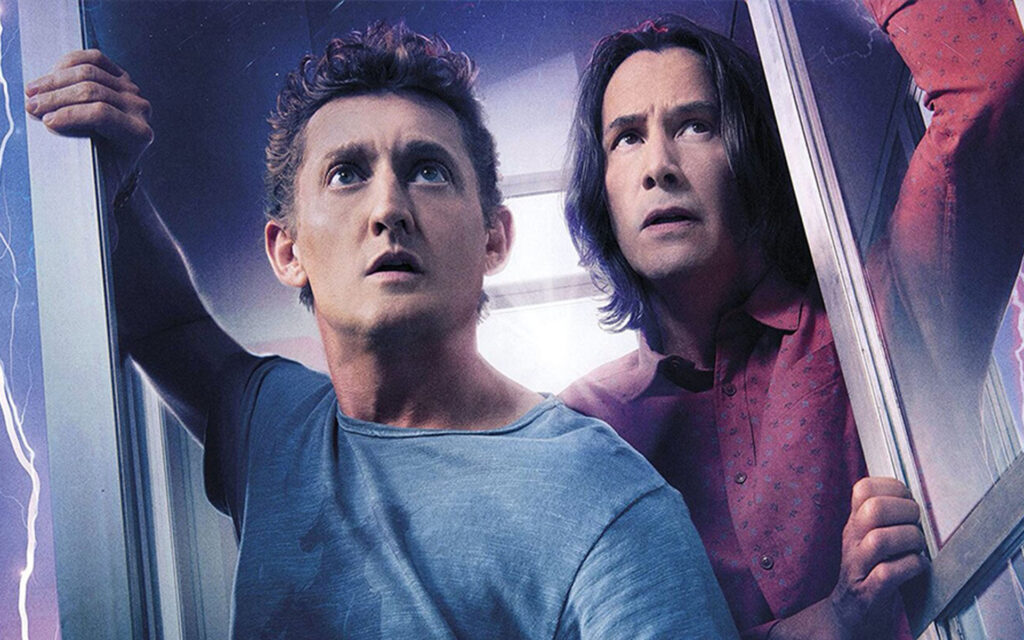 Face the Music is the ultimate tale of Bill S. Preston, Esq. (played by Alex Winter) and Ted “Theodore” Logan (Keanu Reeves) attempting to fulfill their destiny of uniting the universe through song.

Their story first began in Bill & Ted’s Excellent Adventure (1989) where, as high school slackers, they learn that their fledgling band, Wyld Stallions, will eventually help create a utopian society. If, that is, Ted can pass his history class. The easiest way to do this, of course, is to time-travel in a phone booth to kidnap and amass a cavalcade of historical figures for the most epic presentation San Dimas High School has ever seen. It is a most righteous adventure.

The sequel, Bill & Ted’s Bogus Journey (1991) is, well, strange. Evil robot replicas kill Ted and Bill and they go to hell where they meet Death, whom they “Melvin.” To escape Death, pricelessly played by William Sadler, they must defeat him at a game of their choosing. They choose Battleship. It’s one of the greatest scenes in all three films.

Once free, Bill and Ted enlist an extraterrestrial duo, and the time booth, to help destroy their evil counterparts and perform a rock ballad for the ages. Death plays bass guitar. It is nuts.

In Face the Music we get a little bit of everything. Bill and Ted, now middle-aged dads, must time travel once again to find their magnum opus. There are more kidnappings, a killer robot, time itself is amiss, Kid Cudi shows up, and the world’s about to end. No big whoop. 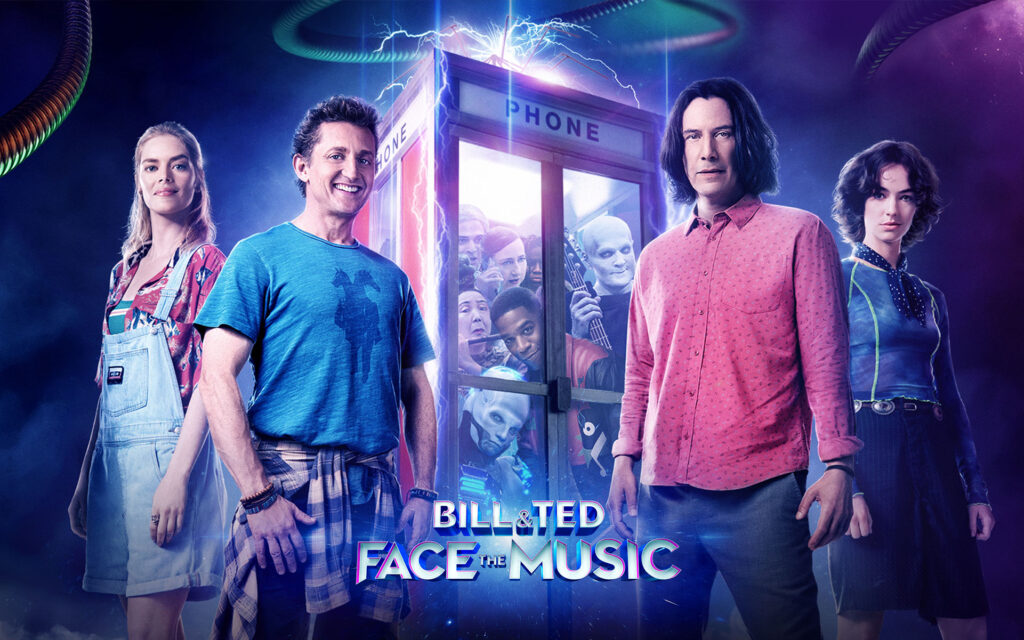 Two dads, their daughters, and a booth full of whimsy. (Courtesy Orion Pictures)

It was not heinous

Did Keanu Reeve’s Ted seem a bit wooden and forced this go round? Certainly. Did Alex Winter (Bill) put his goddamn heart and soul into this motherfucker, and does he deserve a Golden Globe—no, really—for this? Yerp.

Was there a bag of Cheetos® on-screen for an exorbitant amount of time? Cheeseyfingerssayyesss. And did I wholeheartedly enjoy Bill & Ted Face the Music? Unfreakindoubtedly.

The film, admittedly, is a bit of a mess—time travel, amiright?—but there is joy and numerous delights sprinkled throughout. I belched plenty of guffaws from the couch. I was so happy to see Death make an appearance, and we make some new friends along the way, including a hilarious robot. His name is Dennis. Dennis Caleb McCoy.

From Spicoli to Pauly Shore

The original Excellent Adventure was an anomaly for us of a certain age: a PG stoner comedy with no actual stone about it. I was personally built more on the Pauly Shore-esque ethos of the “non-stoner stoner” politely nestled in ‘90s classics like Encino Man, Son-In-Law, and A Goofy Movie—a cleaned-up throwback to Chongs and Cheeches, and flaming vans made of brick weed.

Even with your Spicolis and Dazed and Confuseds out there, this idea of a stoner feeling was more pervasive to me and Bill & Ted aren’t far removed. Face the Music plays with this same idea, hinting at, but not belaboring us, with stoner vibes.

And what strikes me about Ted and Bill, throughout all their films—Face the Music, especially—is their “Goonies never say die” attitudes: They are caring and thoughtful dudes, not wasteoids, who take what they’re given and keep working toward a solution. They ultimately want what’s best for everyone, no judgement, and they sacrifice their whole lives for that cause. We could all be a little more Bill and Ted on the bogus journey of 2020, right?

Even with knowing their destiny, they never lay down and just let it happen: They move toward their goal, unrelentingly. They are not slackers. The Wyld Stallions realize again and again that they haven’t quite achieved the universal peace they’re known for, and they continue to fight. And as loving parents, they pass that fight onto their daughters, Thea and Billie, played brilliantly in-step by Samara Weaving and Brigette Lundy-Paine.

So, enjoy the fuck out of Bill & Ted Face the Music while you’re stuck at home. Preferably after a bong rip and with a joint in hand. Because your home, in this crazy moment, is the perfect venue to appreciate this nostalgia bomb sure to make you stare into the past and face (at least some of) your own music.

Bill & Ted Face the Music (2020) is available to rent or purchase on Apple, Amazon, Google Play, YouTube, Vudu, and more.